Montreal, Quebec–(Newsfile Corp. – May 26, 2021) – QcX Gold Corp. (TSXV: QCX) (OTC: QCXGF) (FSE: 21MA) (“QcX” or the “Company“) announces the start of drilling on its inaugural drill program on the Golden Giant Project in James Bay, Québec. The program consists of 19 planned drill holes for a total of 3,075m across the Golden Giant East (“GGEast“) and Golden Giant West (“GGWest“) blocks. Four drill holes (675m) are reserved for targets on the GGWest block while the other 15 drill holes are planned for targets on the GGEast block. (Click HERE to listen to Aaron Stone, VP Exploration, provide further explanation of the target drill holes locations.) 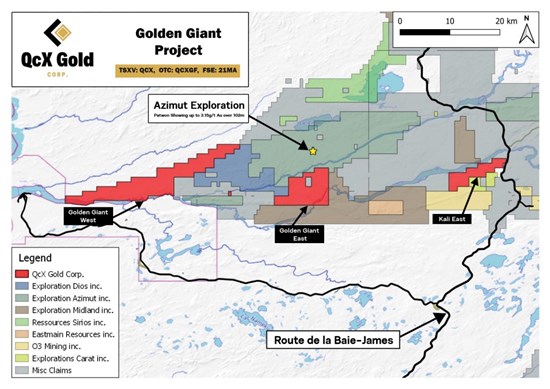 Selected drill holes have one or all of the following:

Aaron Stone, Vice President Exploration of QcX, stated, “After approximately a year from ground acquisition to first stage exploration, to advanced geophysical surveys, and finally drill hole targeting, the QcX team is very excited to finally see the start of our inaugural drill program. It can sometimes take many years before a project sees a drill hole, so we are very happy with the rate at which we have been able to advance the Golden Giant project. It has taken a great deal of work from several parties to get us to this stage and we are confident with our drill targets. Our excitement is shared by external geologists and geophysicists alike that have worked with our data. We look forward to seeing the drill core come out of the ground and will keep the market updated with our observations over the coming weeks and months.”

A selection of drill holes are highlighted below:

Drilling will commence at Golden Giant West (see Figure 2), where surface exploration returned the highest values from grab samples with results up to 18.9 g/t Au (see press release dated December 8, 2020). The elevated gold values are in association with an annular magnetic high anomaly in addition to a chargeability anomaly. In this area, gold is associated with continuous and concordant pyrite enriched horizons (up to 10%) hosted in an amphibolite rock. Three drill holes will target this area while the remaining drill hole to the east will target a brecciated and leached area with strong silica alteration and coarse pyrite mineralisation that showed minor gold values but also produced elevated zinc levels (3540 ppm and 4740 ppm Zn). 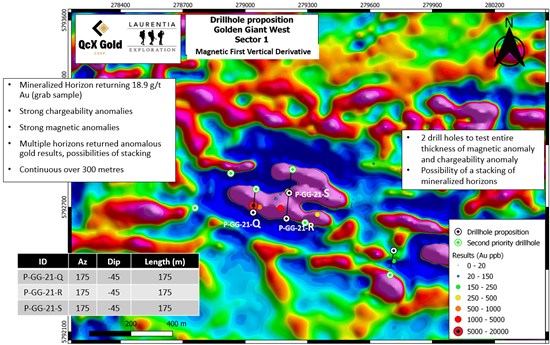 Figure 2: Planned drill holes at Golden Giant West where surface grab samples taken in the vicinity of a magnetic high returned grades of up to 18.9 g/t Au.

The first priority area for the Golden Giant East block includes six holes (see Figure 3). Two holes are planned to intercept quartz veining containing chalcopyrite and pyrite mineralisation that returned grades of up to 4.12 g/t Au, while four are designed to target magnetic and IP anomalies. As can be observed in Figure 3, local folds displaying “S” patterns are observable in the magnetical first derivative, these structures share similarities with the vertical projection of the mineralized zone at Azimut Exploration’s Patwon discovery (only 2.9km north of GGEast). 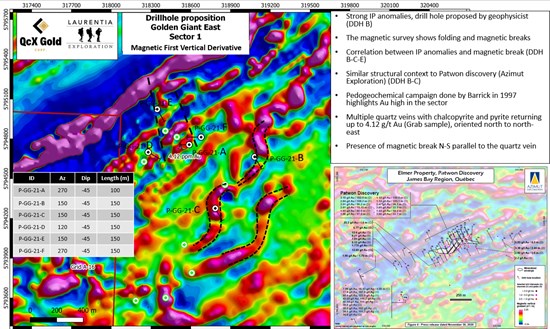 The second priority area at Golden Giant East (see Figure 4) covers an area containing a felsic intrusion which produced values of up to 4.6 g/t Au from grab sampling. These gold values were found in quartz veinlets contained within the felsic intrusion, which in turn is found crosscutting a gabbro unit. This gabbro unit is folded on the same axis as the regional fold trend found across the GGEast property and in which anomalous background levels of gold was found in unmineralized and unaltered rock. 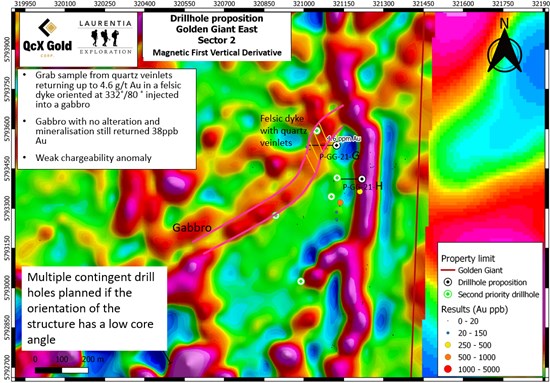 Figure 4: Planned drill holes at Golden Giant East in the second priority area where grab samples returned values up to 4.6 g/t Au within quartz veinlets of a felsic intrusion.

An additional area of interest for the drill program on GGEast is a zone of heavily folded banded iron formation (“BIF“) (see Figure 5). Folded BIF’s are very favourable environments to host gold mineralisation and this area returned anomalous gold values. It is also found within a shear zone that can be traced across the property which was observed during field operations. This adds another layer of structural complexity which can increase the chances of hosting orogenic gold mineralisation. 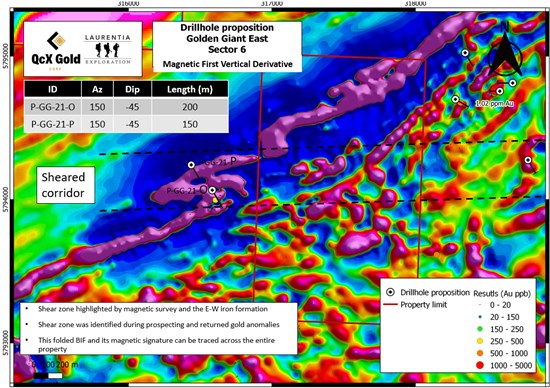 Maxime Bouchard P.Geo. M.Sc.A., (OGQ 1752), a Qualified Person (“QP“) as such term is defined by National Instrument 43-101 – Standards of Disclosure for Mineral Projects, has reviewed and approved the geological information reported in this news release.

QcX Gold is exploring for gold and VMS style mineralization on its highly prospective and well-located properties in Québec, Canada. The Golden Giant Project is located in the James Bay region of Québec, only 2.9 km away from Azimut Exploration Inc.’s Patwon discovery on their Elmer gold project. The Fernet Project is located in the Abitibi Greenstone Belt in the Province of Québec and is contiguous with Wallbridge Mining Company Limited’s Fenelon/Martinière property. Both properties are in close proximity to major discoveries which bodes well for exploration. 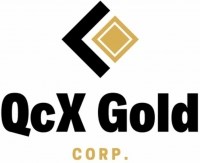 To view the source version of this press release, please visit https://www.newsfilecorp.com/release/85275