The Golden Giant Project is located near the village of Eastmain, in the James Bay region of Québec, Canada which is connected to the Québec provincial highway network, a regional airport, and provincial power. The project comprises three properties, covering 18,992 hectares: Golden Giant East, Golden Giant West and the Kali East block. There is tremendous early upside exploration potential on this property.

“The QcX Gold team is very excited about our upcoming inaugural drill program on the Golden Giant Project. By combining the data from our airborne magnetics program with upcoming IP results and the several gold showings produced last summer, we have armed ourselves with an excellent initial dataset that gives us the best chance of making a discovery. Once we receive our IP results, we will be able to turn these high-priority targets into ‘drill-ready’ targets. We will update the market as soon as these results have been obtained and compiled.” – Aaron Stone, Vice President Exploration, QcX (March 2021)

The Golden Giant Project is contiguous with Azimut Exploration Inc.’s Elmer Gold Project and only 2.9 km from its Patwon Discovery – where significant gold mineralization was announced in January 2020 with drill results up to 3.15 g/t Au over 102 m. In addition, it is also contiguous with Dios Exploration and Midland Exploration projects.

The Golden Giant project shares similar geology with Azimut, including felsic to mafic volcanic rocks, northeast-trending faults and shear zones, northeast-trending fold limbs, as well as gold mineralization identified at surface. It is underlain by Archaean felsic and mafic greenstone rocks of the Wabamisk formation as well as Western properties that include felsic/mafic prospective contacts.

In total, 25 targets were identified across GGE and GGW. These target areas were generated based on gold occurrences from surface sampling together with the structural architecture that characterizes the GGE and GGW Areas of Interest as interpreted from magnetic data and available geological constraints (e.g., structural observations and field measurements).

Magnetics data from the airborne program together with targets areas and major faults can be viewed in Figures 1 and 2, while the full list of generated targets can be seen in Table 1. 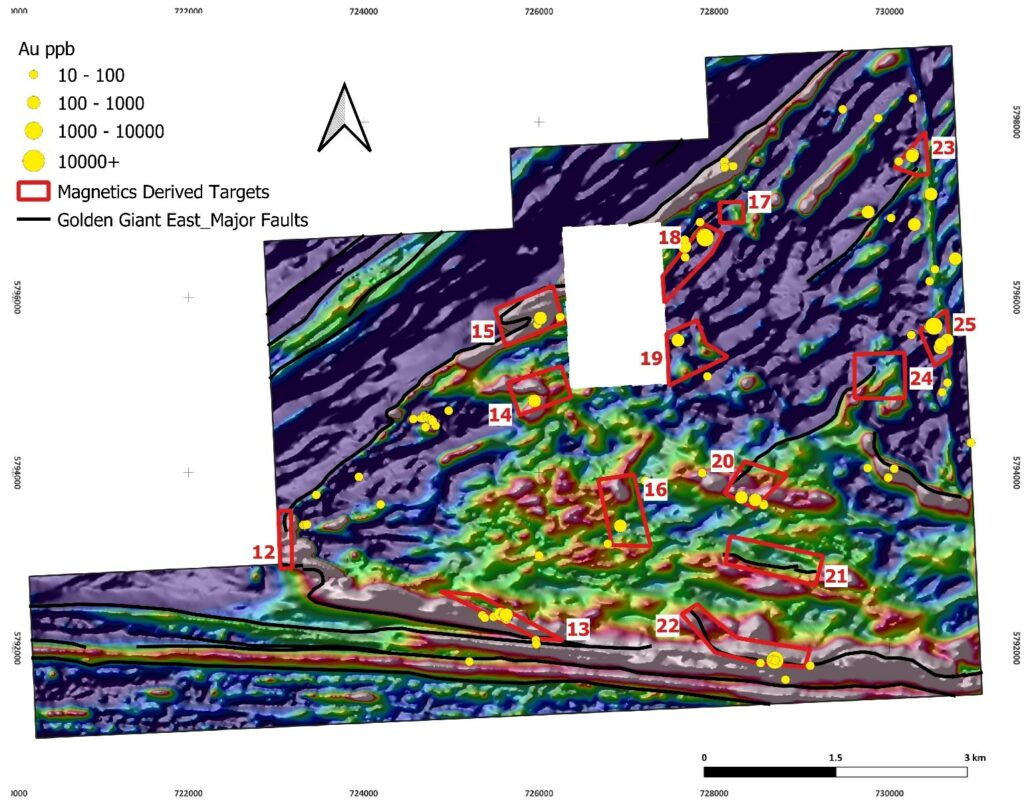